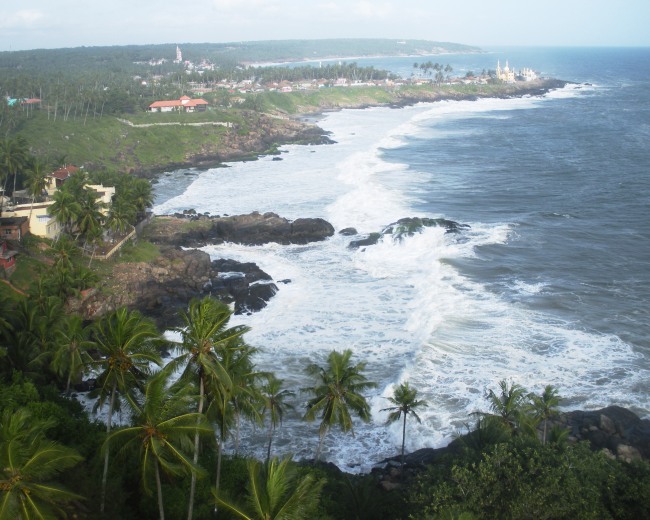 Kovalam is(was) a beautiful tourist destination 18 kms from Trivandrum, half an hour drive from the international airport. The place came into prominence when the Travancore Royals built a castle called the Halcyon castle in the early twentieth century. The place became a popular destination slowly towards the 70’s, thanks to the HIPPIES who were a sort of backpackers who found solace in the isolated and untouched virgin beaches.

I was a regular visitor during my college days and used to take occasional break to sit watching the beauty of the sea, waves splashing against the rocks, watching the sea taking away the evening sun. The place was crowded with tourists mostly foreigners enjoying the waves, eating in the restaurants amid western songs. It was a very pleasant atmosphere.This was in 2000. Now the condition has changed and i really feel sad. Even in the normal peak season the beaches are less crowded by foreign tourists but offcourse localsare present but actually they spend time just for few hours. This decline was a gradual process and now it has become horrific.

As a person who was present here i think the main factors which contributed this were lack of infrastructure like street lights, comfort stations etc, increasing theft and robbery,exorbitant price for Hotels mostly shabby and food, increasing constructions mostly illegal flouting all coastal rules etc by paying bribes. High handed and ineffective policing can also be credited to this.Exploitation and harassment of the guests by the locals also take place giving a bad name to the place. Unhygienic and illegal Ayurveda massage centres bring a lot of criticism and wrong message. Increasing popularity of cheap, professional and natural destinations like Srilanka ,Thailand etc also pose threat where facilities are better and more cheaper.

Alarm bells should be ringing with the Dept of Tourism, Govt of Kerala or else this pardise would be lost for ever and would be difficult to regain the lost glory. Tourism Department had proved earlier by promoting Kerala on the world tourism map by coining Gods own country tag and related marketing.

Recently am using a lot of grey matter to learn German and it seems to be very challenging, interesting and also rewarding. Since from my schooldays, German has fascinated me not cause i wanted to escape to Deutschland but due to one of my teacher called Shukla sir. He was the right embodiment of a geography teacher, balding with few marks or to be precise few irregular pigmentations on his back of the head and which seemed to me like a geographical map. Beg his pardon, he was one of the best teachers i had in my school days who created an interest to learn about new countries,capitals and their location on the map.

One day the learned teacher was taking class and as usual certain other topic came into discussion and that day it was German language and its greatness. Shukla sir had vast knowledge on most of the topics and could debate long till his vocal cords revolt. This time it was German, he was telling the connection it had with Sanskrit, one of the oldest and technically perfect language. He was citing examples and linking words from both the great languages.I forgot the words exactly but the language called German remained in my subtle mind, in deep slumber.

Years passed and i finished my school and during those days the word German came to my mind, many times in the form of Boris Becker or Steffi Graf or BMW or Audi or etc etc but i never felt like learning it. I took it on last priority until i got my professional studies completed. After becoming a professional and started working in a Resort frequented by Germans, i was tired to be dumb in front of words like Guten tag or Entschuldigung and many other such lightening stuff that i started my journey into learning this wonderful language. Now i can understand some simple words and some small usages. Being the third day i thought i would give a break for now but i still remember Shukla sir for sowing the seeds of German in my mind.